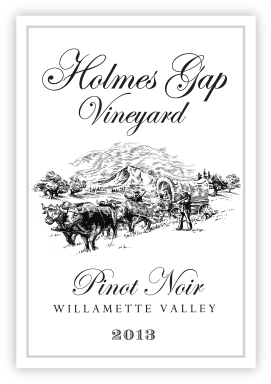 The extended 2013 growing season presented challenges for many growers. However, our vineyard site along with our farming practices allowed us to delay harvest until full grape maturity was achieved. The finished wine displays elements of spice and bright fruit flavors with balanced acid and tannins, all-together, providing a well rounded mouth feel with generous length. (40% new French oak) 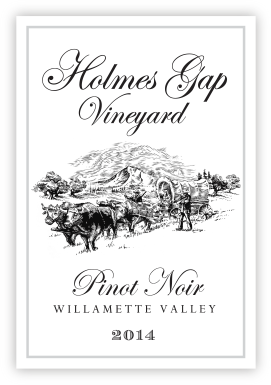 This Pommard Clone “Estate” Pinot Noir was grown during one of the warmest seasons on record. The beautifully developed fruit yields a rich array of fruit flavors up front (black cherry and plum). The finished wine displays elements of spice with hints of clove and pepper. The lush mouth feel ends with a long smooth finish. (40% new French oak) 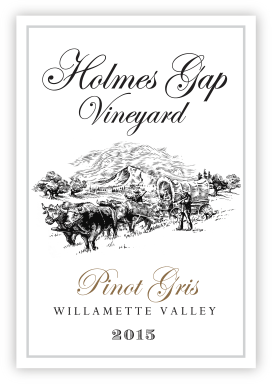 A refreshing, delightful Pinot Gris. This wine is “spicy apple and pear pie in a bottle”. Fermented in steel; then aged in neutral oak to soften the acids and produce a creamy finish.

Holmes Gap, established in 2004 by Jack & Cheri La Rue, was planted in the Spring of 2006, was designed specifically to give the plants adequate time to generate a root system — producing the highest quality grapes desired. As the vineyards mature, we provide less and less irrigation, watering only on a “regulated deficit irrigation” (RDI) basis. The RDI technique can be used to accelerate ripening and improve fruit flavors in a cool climate such as ours.

All of the Holmes Gap Vineyard blocks are planted on southeast facing, sloped hills, ranging from 200 to 450 feet in elevation.

Upper Block: The Upper Block, ranging up to 300’ elevation, is planted to Pommard Pinot Noir on 3309C rootstock. The Pommard clone of Pinot Noir was one of the first clones grown in Oregon. It is considered as a backbone of Oregon Pinot Noir. It has characteristic aromas of blue/black fruits, Marionberries, spice, earth and stone fruits such as plums. It is known for its good color, great structure in both width and length. This block is comprised mainly of Helvetia silt loam soils with areas of Chehulpum.

Lower Block: The Lower Block, ranging from 270’ to 200’ elevation, is also planted to Pommard Pinot Noir on 3309C. 3309C is one of the preferred rootstocks for growing premium wine grapes and accounts for 45% of the rootstock used here. It is resistant to the diseases commonly found in older Oregon vineyards, has a good capacity for developing a strong, deep root structure, and is a low-vigor rootstock. The soils in this block are mainly Woodburn silt loam soils, with Chehulpum at the top of the block and some Helvetia in the lower portion. The Lower Block has the highest organic matter and therefore contains some of our most fertile soil. Vigor management differs greatly from its neighboring Upper Block.

Charity Block: This 1.7 acre plot was planted to Pinot Gris (152 on 101-14MG rootstock). Soil type is mainly Helvetia silt loam. These soils with a depth up to 72” are moderately well drained with a high water holding capacity.

Block Four: This newly developed block, planted in 2015, contains both Pinot Noir and Chardonnay sections. The Pinot Noir Dijon clone 777 was selected for planting on the higher elevation of the block (up to 450 feet) and will be used to blend with and add its unique characteristics to the Pommard from the other blocks. The Dijon 777 clone has complex and well-defined aromas of strawberries, cassis, red currants, cinnamon, minerals and black raspberries. Wines produced from Dijon 777 are typically deep, rich and powerful in the mouth with a broad mid-palate that is focused by soft ripe tannins. The combination of clones is expected to deliver a deep and elegant Estate Pinot Noir with spicy fruit, soft tannins, Pommard and 777 great structure. The lower 2 ½ acres of Block Four are being developed for Chardonnay Dijon clone varieties. The soil structure and vigor of this particular section, along with its orientation, should yield a nice, bright "classically French" yet uniquely Oregon Chardonnay with a crisp acidic appeal. with a hint of oak.

Our goal in establishing the vineyard was to retain, to the best of our ability, the wonderful natural beauty of the surrounding area. In researching the local geographic history we discovered that our planned vineyard property lies very close to a special local landmark, the “Holmes Gap” and therein lies the selection of our vineyard name.

Holmes Gap and the adjacent Holmes Hill were named in honor of Horatio Nelson Viscount Holmes and the property he owned surrounding them. Horatio, born in Virginia in 1813, moved to Illinois and married Nancy Porter in 1837. In 1848, Horatio, Nancy and their three children made the early pioneer journey to Oregon. Horatio led his family, their wagon and oxen team to his 640 acre land claim located 3 miles south of the community of McCoy in the Willamette Valley. Here he built a small cabin and started his Oregon adventure.

Holmes Gap is the area south of McCoy Junction (between Amity and Rickreall) where today the railroad crosses Highway 99W. In the past, Holmes Gap was used as a geologic landmark by the early settlers traveling from the port city of Portland to the capital city of Salem. It was said that “one should pass through Holmes Gap then head East at the river to reach Salem”.

Horatio and his family worked hard developing a prosperous farm consisting of both agricultural crops and livestock. In 1854 Horatio found a small outcropping of coal on his land and initiated an effort to commercially mine the product. He was instrumental in creating the rights for a new railway intended to carry coal from his land the community of Cincinnati (now Eola) which claimed to be at the time, “the head of navigation on the Willamette River”. The railroad was chartered by the Territorial Legislature in 1854 as the “Cincinnati Railroad Company” and the the sale of shares was authorized. Unfortunately the coal was soon found to be of poor quality and was never mined. The railroad was never built.

Horatio was very involved in state politics and served three terms as a member of the Oregon Territory, House of Representatives, for Polk County as well as a Representative for both Polk and Tillamook Counties.

During this period, Horatio and his family continued to develop their farm property. They built a large multi-storied period home near Holmes Hill. In an article from the December 5, 1918 “Oregonian” the property was described as “the magnificent Holmes farm, not far from McCoy” and “one of the display places of the Willamette Valley”.

Horatio died in March of 1886 at the age of 72. His obituary, found in the Oregon Statesman (April 7, 1886), read;
HOLMES – At the residence of his son, Dr. H. R. Holmes, in this city, on Friday, March 26th, 1886, at 5 p.m. H.N.V. Holmes. Yes, kind readers, another pioneer’s feet have grown tired by the way, and he has, after 72 years of active life, lain down forever. Kind father, good neighbor, worthy citizen, true as steel to his friends, kind and generous to a fault, never deceived anybody, never went back on his word, met you over half way in good deeds and kind words. He will be buried Sunday the 28th, at the burying ground of his children, on the old George Gibson farm, on the hill north of Eola, Polk County, Oregon.

NOTE: His grave was later moved to the Pioneer Cemetery in Salem.

Holmes Gap Vineyards Privacy Policy. We at Holmes Gap Vineyards understand your concerns about the security of online transactions. Therefore, our site is equipped with the most advanced Secure Socket Layer (SSL) technology available to ensure the privacy of any information you submit through this site. The information that you provide us, will not be shared with, or sold to other companies.

The information is utilized so that we may offer a superior level of customer service that reflects the quality and limited productions of our wines. Some of our wines will be made available only through private notification from Holmes Gap Vineyards.

Email communications to our mailing list subscribers are sent only to those who have given permission to send them information or contacted us for general information. Any mailing list subscriber can remove his or her name from our outbound email or print communications schedule at any time using this website or by sending an email to jack@holmesgap.com with the title UNSUBSCRIBE in the Subject line.

All orders placed via this website require a credit card upon completion of transaction.

Thank you for your order!

We will be in touch as soon as possible
to finalize shipping and payment.

For immediate questions
please feel free to call us or email Info@HomesGap.com